To all North Pole City Elves, those in Santa's Village, in the Lower 48 and all around the world, this is your weekly update for the week of December 12, 2022. I'm your host Walter "Mistletoe" Livingstone and I'm your co-host, Becky "Marshmallow" Livingstone, Let's go to press.

For the week of December 12, 2022 your sponsor will be Dr. Twinklestein’s Family Medical Center. A center for all your medical needs. Open 24 hours / day, 7 days a week. From sleep disorders to sugar overdose, we treat it all Dr. Twinklestein has over 400 years of experience in the medical field and has seen millions of North Pole City elves, and is there when you need him.

The first four delivery satellites have been loaded and are ready for take off. All of the supervisors from the workshop and warehouses are reporting that they are a few days a head of schedule and will continue with this work pace just to make sure that there are no issues after all of the problems that have been experienced this year. Packaging and loading of the satellites will continue until all are packed and ready for take off. The workshop has already switched over to begin building products for next year, but wrapping will not begin until after the first of the year.

Edward Hinklemyer has ordered emergency repair and replacement services for the flight control center as there are some issues tracking the Red Zephier during vertical take offs and landings when the sleigh falls under 40 feet on the radar. "We experienced these same issues about fifteen years ago, " said Edward, "and it caused some major tracking issues during Santa's deliveries. We cannot and will not experience these problems again this year. I have ordered the controller boards to just be replaced and tested out this week so we can stay on top of this issue. Please expect several take off and landing tests to take place through out the city once the boards are replaced sometime around mid-week."

The department of WWW/PR has released two new pages for Santa's webpage this past week on TAOLF.com. They are "Santa's Favorite Christmas Carols" which is a complete listing of songs that Santa personally listens to and a link to a major playlist on YouTube for all of the songs. This is now a database that can be updated on a regular basis. Also, they released, "One of Santa's Hobbies - Vintage Toy Repair" which is a post that explains how to repair and revive vintage and broken toys including metal, wood, and stuffed animals. When you get a chance, check out these new posts on TAOLF.com.

Temperatures will range form -26 to -33 this week with sunny to partly sunny skies. Please expect a high wind advisory for Wednesday afternoon. No precipitation is in the forecast again for this week.

There was a special report on the WELF-NPC podcast this past week about a young elfling who had found a 45 carrot emerald that he will be using to create a new tree topper for his parents. If you would like more details about this special report and future special reports, please be sure that you subscribe to the station's podcast wherever you get your podcasts. Search for WELF-NPC news.

Amundsen, born in Borge, near Oslo, in 1872, was one of the great figures in polar exploration. In 1897, he was first mate on a Belgian expedition that was the first ever to winter in the Antarctic. In 1903, he guided the 47-ton sloop Gjöa through the Northwest Passage and around the Canadian coast, the first navigator to accomplish the treacherous journey. Amundsen planned to be the first man to the North Pole, and he was about to embark in 1909 when he learned that the American Robert Peary had achieved the feat.

Amundsen completed his preparations and in June 1910 sailed instead for Antarctica, where the English explorer Robert F. Scott was also headed with the aim of reaching the South Pole. In early 1911, Amundsen sailed his ship into Antarctica’s Bay of Whales and set up base camp 60 miles closer to the pole than Scott. In October, both explorers set off—Amundsen using sleigh dogs, and Scott employing Siberian motor sledges, Siberian ponies, and dogs. On December 14, 1911, Amundsen’s expedition won the race to the Pole and returned safely to base camp in late January.

Scott’s expedition was less fortunate. The motor sleds broke down, the ponies had to be shot, and the dog teams were sent back as Scott and four companions continued on foot. On January 18, 1912, they reached the pole only to find that Amundsen had preceded them by over a month. Weather on the return journey was exceptionally bad—two members perished—and a storm later trapped Scott and the other two survivors in their tent only 11 miles from their base camp. Scott’s frozen body was found later that year.

After his historic Antarctic journey, Amundsen established a successful shipping business. He later made attempts to become the first explorer to fly over the North Pole. In 1925, in an airplane, he flew within 150 miles of the goal. In 1926, he passed over the North Pole in a dirigible just three days after American explorer Richard E. Byrd had apparently done so in an aircraft. In 1996, a diary that Byrd had kept on the flight was found that seemed to suggest that the he had turned back 150 miles short of its goal because of an oil leak, making Amundsen’s dirigible expedition the first flight over the North Pole.

In 1928, Amundsen lost his life while trying to rescue a fellow explorer whose dirigible had crashed at sea near Spitsbergen, Norway.

The NPC Commerce is still accepting donations for the basket raffle that will be at this year's delivery celebration. If you have not yet had a chance to get your donation ready, representatives from the association will be around this week at the Cocoa Pub Crawl and can stop by to pick up your donations. Please call the association and let them know that you have a donation that they can come pick up.

There will be a City Council Wednesday afternoon since they have been called in for the "No Fly Ordinance". If there are any nominations for the Golden Candy Cane Award, now is the time to submit them to council offices so that they are reviewed for this year.

Tinsel Football fans were taken by surprise this past week when the defending champs, the Livingstone Pirates, were upset by the Darlington Tigers and taken out of the playoffs! Theodore "Sugar" Livingstone, the quarterback for the Pirates, expressed disappointment at not being able to reprise their role as Tinsel Football Champions, but said, "It was a great game and the best team won. I wish them the best as they move on in the playoffs."

Also winners this week and moving on further in the playoffs were the Leighton Gumdrops, the Twinlkestein Stars, and last year's runner ups, the Hinklemyer Falcons.

This week, in the semi-finals, we will see the Leighton Gumdrops taking on the Darlington Tigers on Friday evening and the Hinklemyer Falcons taking on the Twinklestein Stars on Saturday evening.

Be sure to head out and cheer on these teams and see who will be moving on to the finals!

Monday the 12th is Gingerbread House Day! The North Pole City Hotel will be holding its annual Gingerbread House display. Anyone wishing to see the fabulous creations by their talented staff can visit the display through Wednesday. They will be set-up in the ballroom.

Tuesday the 13th is Hot Cocoa Day and Violin Day so the Hot Cocoa Pubs are all holding a Cocoa Pub Crawl where you can listen to each of their violin artists play while trying out all their latest cocoa recipes.

On Friday the 16th it is National Ugly Sweater Day in the lower 48. Be sure to wear your most Elfie sweater today! We elves know that no jolly sweater could ever be considered "ugly", but it is a day we can show off our latest shimmering attire.

Saturday the 17th is Maple Syrup Day. Mrs. Claus's Kitchen will be hosting a Maple Syrup Festival where you can taste all of your favorite maple syrup infused foods and treats.

And finally this week, on Sunday the 18th is Twin Day! We encourage everyone to visit city center dressed identical to another elf today... bonus points for any true twinned elves who dress identical! As a bonus, visit the telegraph office dressed as twins and get a bracelet that says "TWIN" in Morse Code.

WELF-NPC would like to wish a very happy 675th birthday to Maple "Noel" Scarbough over at the Division of Forestry. Maple "Noel" has been at the division now over 400 years and has produced a video for the Department of Elfland Security that will be coming out on the website soon. We all here wish you many more happy years and thank you for your service.

This is Walter "Mistletoe" Livingstone and Becky "Marshmallow" Livingstone with the reminder: A mind is like a parachute. It doesn’t work if it is not open.. 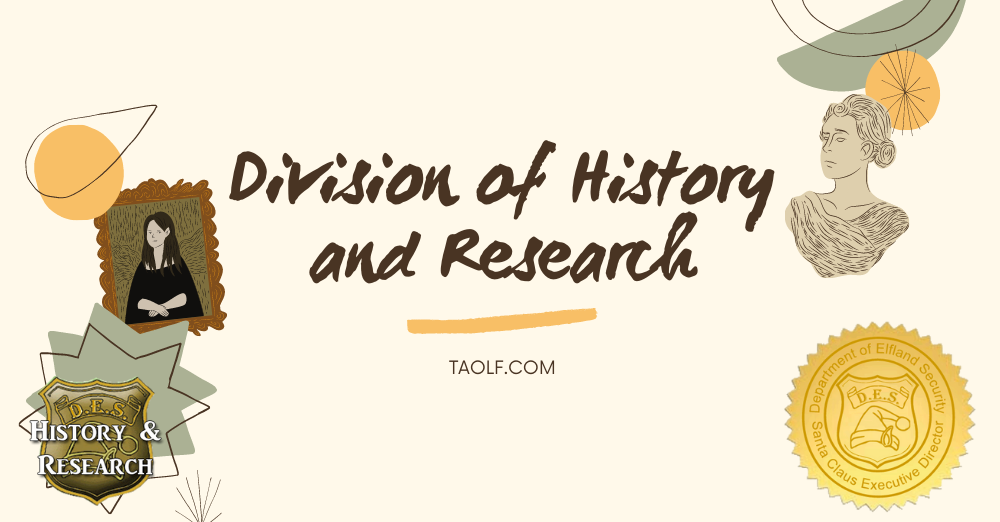