To all North Pole City Elves, those in Santa's Village, in the Lower 48 and all around the world, this is your weekly update for the week of December 26, 2022. I'm your host Walter "Mistletoe" Livingstone and I'm your co-host, Becky "Marshmallow" Livingstone, Let's go to press.

Santa and his team arrived back at North Pole City about an hour and twenty minutes ahead of schedule this year. Santa said that the team was able to catch a headwind on the last leg of the journey which sped up his final approach. In total, Santa was able to deliver 7,623,693,262 presents to children across the word who were on the nice list and are still believers. Santa and Mrs. Claus will be leaving early Tuesday morning for their two week vacation to their villa in the Caribbean and plan on returning back to the North Pole the second week of January.

Edward Hinklemyer has reported that the final cleanup is taking place within Santa's Village from the delivery celebration and then all warehouses, workshops, and factories will be shut down for vacation starting December 27, through January 3. There will be no overtime and there should be no elves within these areas during this time.

"I would like to thank everyone for all of their hard work this past season, " said Edward, "Please take this time to spend it with your friends and family and we will see everyone bright and early the morning of January 4."

All of the clocks and work shift whistles throughout Santa's Village have been stopped and turned off. They will be recalibrated and turned back on again by Father time at 12:01 a.m. on New Year's Day.

The Division of WWW/PR has been working hard over this past week to get many posts up on the website from different divisions for the Department of Elfland Security. If you have not been following along, most of these posts are for elves in training and you may want to take some of your time off to take a look at these posts to get caught up on some of your training.

Temperatures will remain cold this week from -32 to -27, with snow flurries expected on Tuesday, Wednesday, and Thursday.

Firewood is being delivered out to Polar Lake for those going out this week to have some fun in the snow during their winter break.

We attempted to come to you live from the delivery celebration this year with our remote unit to bring you some of the excitement that was taking place, such as the first gift of Christmas and Santa's take-off; however, a very important case that included some cabling and the microphones were forgotten back here at the station. We did not have the time to run back and get these items before the celebration began, so we will try again next year.

If you were not there, some of the things that you did miss were the First Gift of Christmas, which was given to Sunshine "Candy Cane" Winterboune from the Forestry Division who received a new pair of gold plated tree trimmers, and this was the first year that Santa lifted off with a vertical Take-Off. It was amazing to see Santa and the team, hover up above the crowd and take-off. He then flew up over the city, picked up some speed, and did a super sonic fly by right over the Santa's Village Christmas tree then disappeared out over the Dark Mountains. It was a very exciting departure this year, and again, we will try to go live again next year.

On December 28, 1895, the world’s first commercial movie screening took place at the Grand Cafe in Paris. The film was made by Louis and Auguste Lumiere, two French brothers who developed a camera-projector called the Cinematographe. The Lumiere brothers unveiled their invention to the public in March 1895 with a brief film showing workers leaving the Lumiere factory. On December 28, the entrepreneurial siblings screened a series of short scenes from everyday French life and charged admission for the first time.

Movie technology has its roots in the early 1830s, when Joseph Plateau of Belgium and Simon Stampfer of Austria simultaneously developed a device called the phenakistoscope, which incorporated a spinning disc with slots through which a series of drawings could be viewed, creating the effect of a single moving image. The phenakistoscope, considered the precursor of modern motion pictures, was followed by decades of advances and in 1890, Thomas Edison and his assistant William Dickson developed the first motion-picture camera, called the Kinetograph. The next year, 1891, Edison invented the Kinetoscope, a machine with a peephole viewer that allowed one person to watch a strip of film as it moved past a light.

In 1894, Antoine Lumiere, the father of Auguste (1862-1954) and Louis (1864-1948), saw a demonstration of Edison’s Kinetoscope. The elder Lumiere was impressed, but reportedly told his sons, who ran a successful photographic plate factory in Lyon, France, that they could come up with something better. Louis Lumiere’s Cinematographe, which was patented in 1895, was a combination movie camera and projector that could display moving images on a screen for an audience. The Cinematographe was also smaller, lighter and used less film than Edison’s technology.

The Lumieres opened theaters (known as cinemas) in 1896 to show their work and sent crews of cameramen around the world to screen films and shoot new material. In America, the film industry quickly took off. In 1896, Vitascope Hall, believed to be the first theater in the U.S. devoted to showing movies, opened in New Orleans. In 1909, The New York Times published its first film review (of D.W. Griffith’s Pippa Passes), in 1911 the first Hollywood film studio opened and in 1914, Charlie Chaplin made his big-screen debut.

In addition to the Cinematographe, the Lumieres also developed the first practical color photography process, the Autochrome plate, which debuted in 1907.

Volunteers will be working at the North Pole City Commerce offices this week adding a new 24,000 square foot addition to the building. This new addition will be used mostly for storage and work areas. With some of the additional events now being organized by the association, more space is needed to help house items and to provide work tables for volunteers. There will be a section created with shelving as well as one with garage doors out the back. The association is very excited for this new addition.

Tinsel Football had a bye week this past week, but scheduled for this week are the finals between the Hinklemyer Falcons and the Leighton Gumdrops! It is expected to be another nail-biter like last year.

The big game will be held this Saturday, the 30th, at 3 pm in Reindeer Stadium.

Crowds of elf fans are expected and the NPC Sports League spokesman Marcus "Icecicle" Appleton boasted that they, "...have some special treats planned for the concessions at this game, but we are keeping them under wraps until we open the concessions on Saturday!"

We can not wait to see what they come up with. Hope to see you all at the big game!

In observance of National Candy Cane Day and Thank You Note Day, the team at the North Pole Post Office will be handing out candy canes to anyone sending a thank you note on December 26th.

December 28th is Card Playing Day. Stop by the cocoa pubs and join in a card game. They will each be having different card games available all day. Check with each cocoa pub to see which games they are playing... and grab a cocoa while you are there!

On the 30th it is bacon day! Try out some new recipes using bacon on Saturday--and maybe bring some to share at the Tinsel Football game--maybe the secret treats at the game will be involving bacon!

To finish out and start the new year off right, we will celebrate the Universal Hour of Peace From 11:30 p.m. on December 31st to 12:30 a.m. on January 1st, with a candlelight vigil in city center. The Universal Hour of Peace celebrates taking a step toward a war-free world. Later on the 1st will be a Polar Bear Plunge out at Polar Bear Lake for Polar Bear Plunge Day. Plan to stop out to watch or participate in the fun!

WELF-NPC would like to wish a very happy 425th birthday to Cindy "Sparkles" Appleton from Mrs. Claus' Kitchen. Cindy has been in charge of wrapping all of the silverware that is used in the cafeteria now for almost 100 years. She says she simply loves her job and cannot wait to start her day with loading up the wrapping machine. We wish her many more happy years.

This is Walter "Mistletoe" Livingstone and Becky "Marshmallow" Livingstone with the reminder: Age is of no importance unless you’re a cheese.. 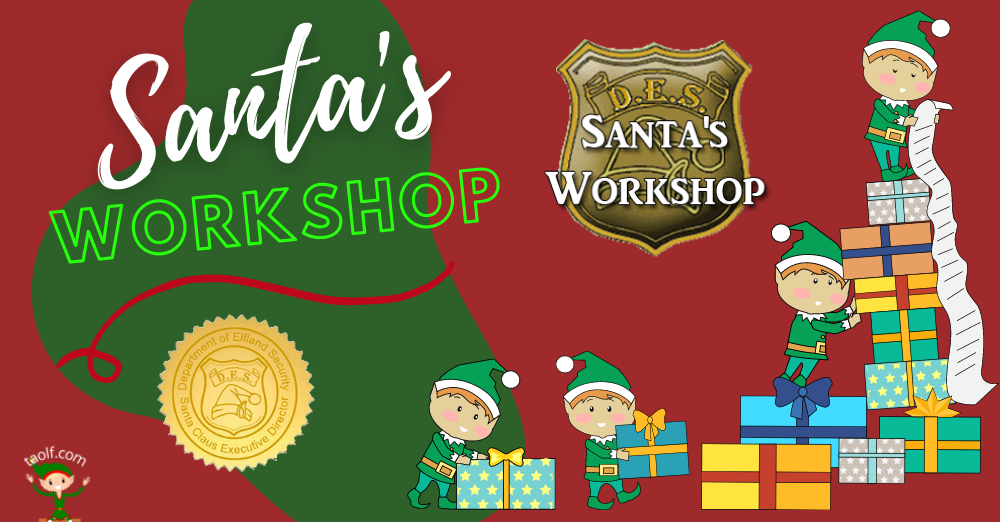