To all North Pole City Elves, those in Santa's Village, in the Lower 48 and all around the world, this is your weekly update for the week of January 23, 2023. I'm your host Walter "Mistletoe" Livingstone and I'm your co-host, Becky "Marshmallow" Livingstone, Let's go to press.

For the week of January 23, 2023 your sponsor will be Ollie’s Ornaments located at 927 Pine Tree Lane. This week’s special take 50% all remaining 2022 ornament and decoration designs. That’s Ollie’s Ornaments, your one stop shop for Holiday decorations.

Santa has asked the engineering department to create a new technology wing off the side of the Workshop residence for elves to be able to go into the computer lab in a comfortable environment to conduct research on the Internet. Santa would like to encourage more elves to embrace technology and research anything that may be available to help with the design and construction of gifts. This new facility will provide the craftsman elves to have a place where they can go and conduct this research and sketch up some new designs. Santa would like to have this completed and online by the end of the week.

Edward Hinklemyer has asked the Division of Security to do their pre-checks of the North Pole City Hotel Saturday morning in preparation for Father Time's "Reset Your Clock Dinner" on Saturday evening. Father Time, Santa, and Mrs. Claus will all be at the dinner, so expect some additional security checks if you are attending the dinner yourself.

Father Time also wanted to remind you to make your reservations for the dinner by contacting the NPC Hotel and to bring any clocks you want him to reset to his official time as well.

All workers are back at the division and have completed several projects and requests.

They are also preparing some new databases for the website and for documenting some historical information for the entire department. These databases will include a business directory for the North Pole City Commerce Association, a directory of elf names, a communication directory for all of the workshops, warehouses and factories, plus much more. Once the databases are completed you will see webpages show up at different spots throughout the website.

Temperatures this week will continue to hover around -30 degrees with the no snow expected all week. The snow ended yesterday and put the total accumulation for North Pole City at just around 5 feet for the entire storm. Expect to see some sun sneaking through the cloudy skies on Wednesday.

Interns from WELF-NPC and the Peppermint Post will begin compiling some historical data that will document different items that have been covered over the years which will be turned over to the Division of History and Research at the Department of Elfland Security. This information will be used in the compiling of the database projects and more information for the TAOLF.com website. This project is set to begin this week.

Gold is found in Sutter Creek, California on January 24, 1848 and starts goldrush.

Sutter Creek was founded in 1844 by Captain John Sutter. In 1845-46, the original settlers came in search of timber, not gold. With the discovery of gold in 1848 though, Sutter Creek became a destination for gold seekers from around the world and became a mining boom town in 1854.

Sutter's Creek, which is a tributary to the South Fork of the American River east of the Sacramento Valley and San Francisco, was named for a Swiss immigrant who came to Mexican California in 1839. John Augustus Sutter became a citizen of Mexico and won a grant of nearly 50,000 acres in the lush Sacramento Valley, where he hoped to create a thriving colony. There he built a fort that became the center of his first town, New Helvetia.

In the 1840s, Sutter’s Fort became the first stopping-off point for overland Anglo-American emigrants coming to California to build farms and ranches. Though sworn to protect the Mexican province from falling under the control of the growing number of Americans, Sutter recognized that his future wealth lay with these new settlers. Then with the outbreak of the Mexican War in 1846, he threw his support to the Americans, who emerged victorious in the fall of 1847.

When the war was over and California was in the hands of the United States, Sutter hired the millwright James Marshall to build a sawmill along the South Fork of the American River in January 1848.

In order to redirect the flow of water to the mill’s waterwheel, Marshall supervised the excavation of a shallow millrace. On the morning of January 24, 1848, Marshall was looking over the freshly cut millrace when a sparkle of light in the dark earth caught his eye. Looking more closely, Marshall found that much of the millrace was speckled with what appeared to be small flakes of gold, and he immediately told Sutter. After it was confirmed that the flakes were indeed gold, Sutter quietly set about gathering up as much of the gold as he could, hoping to keep the discovery a secret. However, word soon leaked out and, within months, the largest gold rush in the world had begun.

The California gold rush ultimately ended up being a disaster for Sutter. Though it brought thousands of men to California, the prospectors had no interest in joining Sutter’s community. Instead of this being good for the town, the prospectors overran Sutter’s property, slaughtered his herds for food, and trampled his fields. By 1852, New Helvetia was ruined, and Sutter was nearly wiped out. Until his death in 1880, he spent his time unsuccessfully petitioning the government to compensate him for the losses he suffered as a result of the gold rush he unintentionally ignited.

The North Pole City Commerce is asking for volunteers to help in compiling a directory of businesses throughout North Pole City. This information will be turned over to the Division of History and Research and the Department of Elfland Security who will be using the information to compile a database that can be accessed on the TAOLF.com website. Right now, the business directory is a static webpage; however, by having a database, it can be updated on a regular basis to keep it current and active. Volunteers can stop by the offices on Tuesday morning to go over the project.

Santa and Edward Hinklemyer have sent a notice out to the City Council who are also the elders of the Elf Clan Villages asking them to help start recording elf names of the elves that live and work within North Pole City. It is estimated that this is close to a million elves within the city limits, but there has never been any type of census taken. The thought process is to help document those who live within the village to get them placed on lists for birthday and anniversary announcements and gifts. This of course will always be optional and never a requirement.

Sign-ups for the Snowball Games went well this week and all teams are now set. The teams for each of the Hot Cocoa Pubs include some returning elves and some brand new members. We wish them all success as they begin competitions next week as we head into February already. There will be an additional training this week on Friday for anyone else who would like to be trained as a judge for this year's games. If interested, be at the NPC Sports League Offices at 6 pm Friday evening.

We start out the week with National Handwriting Day on the 23rd and the Indernational Day of Education on the 24th. Elflings will be practicing their handwriting skillls with Mrs. Claus this week in celebration of them both. You can practice along too with some worksheets which are available on Mrs. Claus' page on TAOLF.com.

The 24th is also Compliment day and the NPC Post Office is offering compliment cards in their lobby that can be delivered on compliment day.

The 25th is Library Shelfie Day and readers are encouraged to take a selfie with their most favorite library shelf showcasing the books that stand out for them. You can stop by the library or your own private bookshelf, but be sure to post your shelfie with your favorite books.

In celebration of Chocolate Cake Day, chocolate cake will be available in the workshop cafeteria and all cocoa pubs in town on the 27th.

Finally, Sunday the 29th is Puzzle Day! We want to thank Herbert "Happy" Yeardley of Santa's Workshop who has created an online puzzle for everyone to enjoy and help to celebrate. Check it out here: https://im-a-puzzle.com/share/77288dd6d04a0d8

WELF-NPC would like to wish a very happy 575th birthday to Hailey "Lollypop" Birkenhead who is a worker with the division of village workers. Hailey's main responsibilities includes ordering supplies for all of the trash receptacles throughout the city. The current count of trash receptacles is almost 200,000 so her job is extremely important to keep up with the demand. We wish her many more happy years.

This is Walter "Mistletoe" Livingstone and Becky "Marshmallow" Livingstone with the reminder: It always seems impossible until it is done. ~Nelson Mandela. 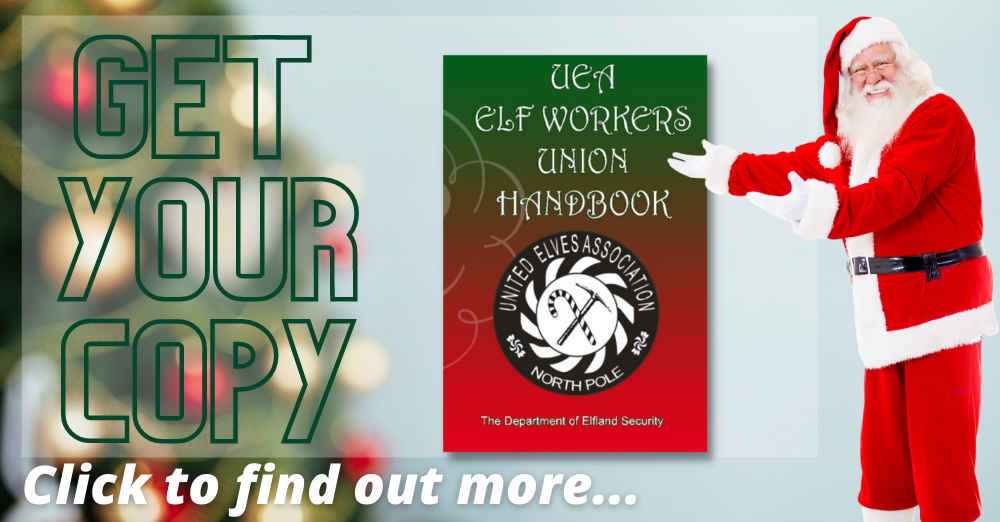